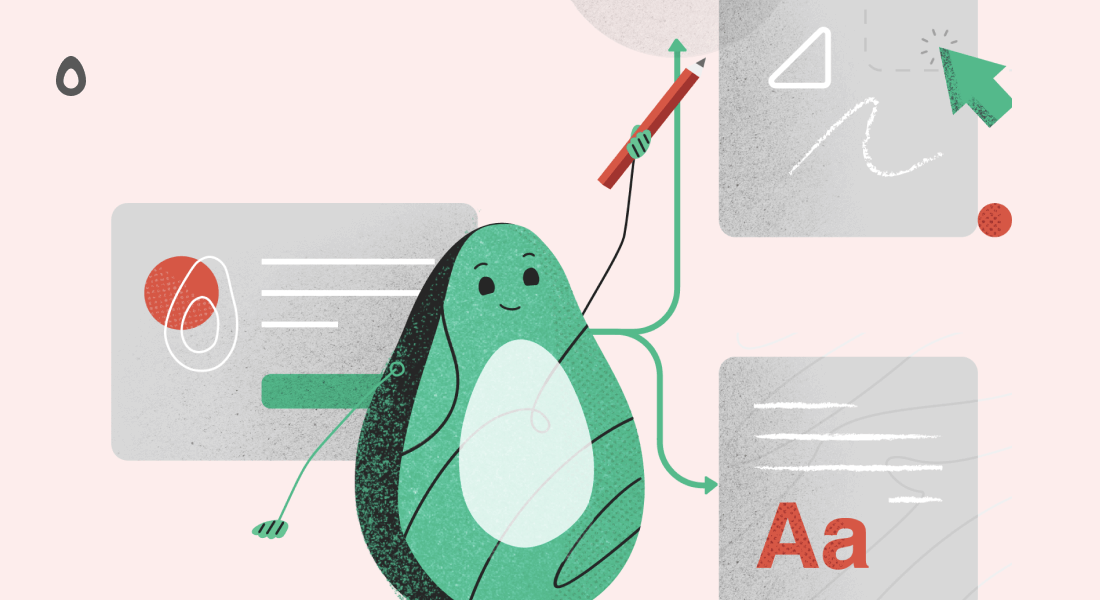 How we shipped support for screen flows thanks to Shape Up 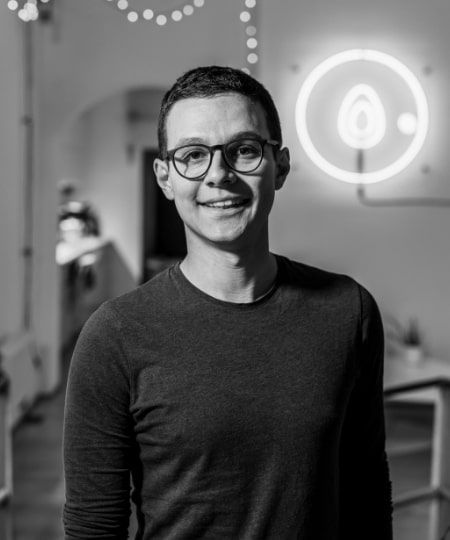 Our mission at Avocode has always been to help different stakeholders in the design process work more efficiently with design files - with a primary focus on front-end engineers.

The most common use case for Avocode is this:

Most of the Avocode tools & features are built to help these two parties collaborate. Besides discussing things via comments, we always knew that developers also need to understand screen flow logic.

So back in 2018, we have built a simple Prototype player - any design file that contained some logic made via connections could be clickthrough also in Avocode. This was a nice little addition, but as developers ourselves, we understood we haven’t solved this fully.

To make it crystal clear, we had this...

Initially, our app has been built to display one design artboard at a time... and now we clearly need to display more - kind of like Sketch, Adobe XD, or Figma do.

To pull this off in the browser, that means that you need to parse uploaded design files, render them via C++, compile the result by Emscripten into machine-readable JavaScript code, and thanks to WebGL display the result. By the way, besides the parsing part, this is similar to how Figma renders design frames in the browser.

The design parsing is crucial to enable us to render all sorts of design file formats in the browser - like the afore-mentioned Sketch & Adobe XD.

Developing such technology isn’t a piece of cake. Luckily, we started building it years ago.

In early 2020 our rendering technology reached the state that it was not only displaying design artboards side by side in the browser (while making sure they remain sharp when the user pans or zooms), but it was working relatively fast. See below how our rendering works (for example, this is some Adobe XD artboard).

It was time to test it on a new project. Displaying (and editing) screen flows seemed like a great fit.

So what was stopping us?

Redefining our approach to product development with Shape Up

Although we had the technology ready, we had to design & build a completely new front-end and tweak many APIs. Based on previous product development experience, we always treat new feature development as experimental, meaning we don’t want to burn too much time on a project that doesn’t have an ensured value.

During the research phase of my "shaping" this project, I found out a few things worth mentioning here:

Our take on screen flows (in the MVP) was to make design flows fully accessible online - even without design tools. We wanted to enable:

Until the end of 2019, our process was a combination of Agile and Scrum. Most of our developers were dedicated to large-scale projects with only weekly sprint checks. When something was taking a little longer, it was simply tracked as "{task_name} Volume XY" - based on how many weeks it took.

From a business perspective - this is not a healthy approach because you don’t have clear deadlines.

So how could we change the culture and enforce fixed dates of release to innovate faster and ship more frequently? In a way that all team members would be motivated and wouldn’t feel pressured by strong directives?

Well, dear reader, I feel I may have found the solution. Have you ever heard of Shape Up?

Me neither... until the summer of 2019, when one of my friends sent me a book called Shape up by Basecamp. Spoiler alert - we implemented this methodology and it seems to do wonders for us.

So what is Shape Up about?

The Shape up really takes into account the preparation where an assigned person (called the Shaper) shapes (aka prepares) the concept of the feature in advance. Meaning, the Shaper will dive deep into the problematics in a few basic steps.

The key takeaway is that you'll spend 6-weeks on a project, and after that, you'll validate how it went. Whether the project turns out to be successful (read: you’ll ship something) or a failure, you spend "only" six weeks, not six months.

Excited by stumbling upon the Shape up as something new and unexplored, I estimated that using this process we could ship and validate the first version of prototyping in Avocode 1-2 Shape cycles, i.e. between 6-12 weeks.

TIP: If you want to know more about our path to adopting shape up, stay subscribed to our blog - the article is in progress!

So let’s see how we applied this "magic" process

In the first Dev cycle (read six weeks), we wanted to have an MVP, which would allow you to view artboards from one design file in the browser and enable you to drag connections from design elements (layers and layer groups).

This is a rough sketch of what I had in mind - connecting the Flow app with our current Design file manager.

Marker sketches - Showing the flow of the 2 apps.

My role was to supervise and help answer possibly unclear specifications.

The first technical challenge emerged right after the first couple of days, regarding the file formats. It is true that Avocode fully supports Sketch, Figma, Adobe XD, Photoshop, and Illustrator files.

So we reached an inevitable trade-off - to launch prototyping "only" with the support of Sketch, Figma, Adobe XD files.

The next challenge was putting our rendering technology under a performance test.

Displaying all artboards at once, even for big files containing lots of images. The overall performance had to be good, loading times had to be fast, zooming, and panning had to be smooth - no lagging or waiting times. No pressure, right?

Tip: Learn how we scale designs thanks to concurrent design rendering.

We also spent a lot of time discussing how to decrease loading times in the Present mode - namely, not having to load artboards one by one. For example, we thought of pre-loading fragments of particular artboards. However, it’s challenging since artboards can be connected completely randomly across the whole file.

Therefore, we decided not to do any "magic" and just hide the artboards we don’t need. In reality you'll always see the desired artboard in the flow, but the rest of the artboards will still be loaded and present, just hidden. By this solution, we've achieved smoothness and reduced loading time dramatically.

Going across the finish line

Six weeks were over. What did we end up with?

Overall - I would say quite a success. Internally, we decided that this project deserves to be kept alive, and we dedicated six more weeks before going live with it.

In 12 weeks we were able to ship Avocode Flow with:

What’s the added value for our users?

Besides helping developers understand flow logic in design files, we also created a tool for UX specialists and other stakeholders who need to create simple clickable flows and diagrams.

Before we start adding new features, we need to hear from you. I’ll welcome any feedback at josefkettner@avocode.com. 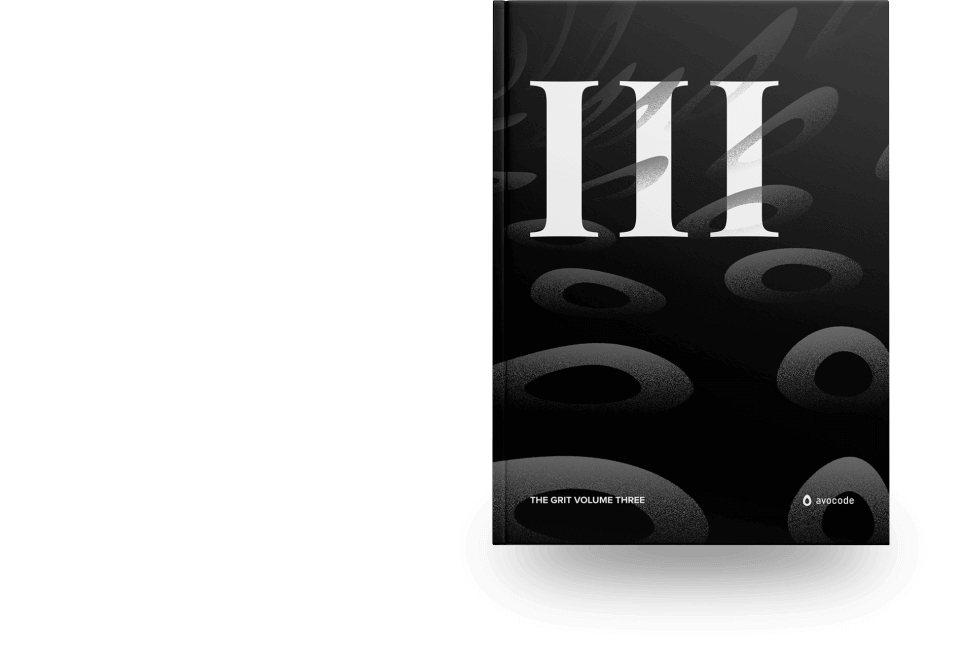